Storyville: Postcards from Tora Bora and the FBI Blew up my Ice Skates 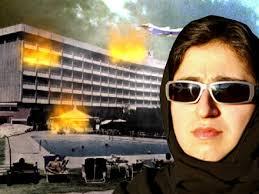 At the height of the Cold War, the Osman family frantically escapes from Afghanistan, leaving almost everything behind. After two decades of living in America, Wazhmah Osman, a young Afghan-American woman returns to her childhood home. On an alternately sad and humorous quest, she finds her estranged father who in the aftermath of war chose his country over his family. On the road, Wazhmah frequently finds herself at a strange intersection where cultures clash, identities are mistaken, and the past violently collides with the present.

preceded by The FBI Blew up my Ice Skates by Sara Zia Ebrahimi & Lindsey Martin (USA, 2016. 7 min)
Based on a true story, the film tells a story from the Iran Hostage Crisis in 1980 from the perspective of Haleh, an eight year old who just wants to enjoy her ice skates. The film raises questions about the human cost of surveillance and the criminalization of immigrant communities, linking past policy decisions with current national discussions around security and xenophobia. ​