Community Media in a Digital Age 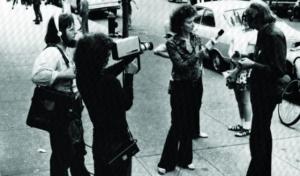 Community Media in a Digital Age is a conversation with community activist DeeDee Halleck on truth-telling and trust building through communal media making practices, on Tuesday, October 1, 2019 from 12-2pm. The event is free and open to the public, and has been organized in collaboration with the Media, Inequality & Change Center, Scribe Video Center, and PhillyCAM to celebrate community media in Philadelphia. Following the program, we invite you to join us at 6pm for the premiere screening of We Tell: 50 Years of Participatory Community Media at Lightbox Film Center, and at PhillyCAM on Thursday, October 4th at 7pm for a live interactive television show.

October 2019 marks the ten-year anniversary of public access television in Philadelphia. In cities like New York, Boston, Los Angeles, Chicago, and Atlanta, community media operations—also commonly referred to in the U.S. as PEG (public, educational, and government access cable television)—came to life amid the emergence of consumer video recording technology and cable television in the late 1960s. However, in Philadelphia, it took a 27-year activist-led fight to realize PhillyCAM—a refreshed vision of public access television and community radio harmoniously combined in one organization.

The discussion will be led by communications doctoral student Antoine Haywood, and will focus on how citizens continue to use community television and radio to communicate local identity, share authentic perspectives and disrupt hegemonic narratives disseminated by mainstream media. There will be an emphasis on how democratic media-making organizations can facilitate trust building and truth-telling to maintain their relevance during an era defined by eroding local news ecosystems, dated public interest media policies, and unregulated digital platforms and infrastructures.

DeeDee Halleck is a media activist and maker, one of the founders of Paper Tiger Television and the Deep Dish Satellite Network, and a professor in the Department of Communication at the University of California-San Diego. Her first film, Children Make Movies (1961), was about a film-making project at the Lillian Wald Settlement in Lower Manhattan. She has led media workshops with elementary school children, reform school youth, and migrant farmers. In 1976 she was co-director of the Child-Made Film Symposium, which was a fifteen-year assessment of media by youth throughout the world.

She has authored Hand Held Visions: the Impossible Possibilities of Community Media, co-edited Public Broadcasting and the Public Interest with M.E. Sharpe, and written numerous essays on independent media. A retrospective of Halleck's work was screened at the Documentary Festival of Brazil in Rio de Janeiro and Sao Paulo in 1994. A pioneer in video, Halleck's contributions are of major importance to the field of independent media.

Antoine Haywood is a doctoral student and research fellow at the University of Pennsylvania's Annenberg School for Communication. His academic interests include nonprofit media, media policy and regulatory landscapes, and local media ecosystems. Prior to studying at Annenberg, he was Philadelphia Community Access Media's (PhillyCAM) Membership and Outreach Director. Antoine's professional work has broadly entailed the development of education programs for youth and adults, facilitating community-driven documentary projects, producing a variety of local TV series, serving on nonprofit boards, participating in social justice coalitions, and grant writing for community engagement programs.