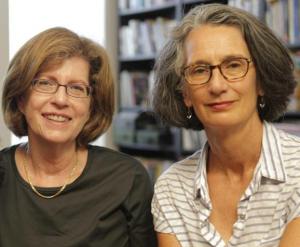 Barbara Attie and Janet Goldwater - For more than 30 years, Philadelphia-based filmmakers Barbara Attie and Janet Goldwater have collaborated on award-winning documentaries that raise women’s voices. They have brought focus to reproductive rights through nationally broadcast films and widely circulated educational and advocacy commissioned work. Attie and Goldwater have profiled female change-makers in powerful biographies, giving space to acts of resistance in the pursuit of a more just, fair world. They have produced eight documentary films together, showcasing their lifetime commitment to the health and social justice issues that women face globally.

Attie and Goldwater are the recipients of a Pew Fellowship in the Arts, a Leeway Transformation Award, a Pennsylvania Council on the Arts Fellowship in Media, and have had films screen at Sundance Film Festival, DOC NYC, SILVERDOCS, Human Rights Watch, and BlackStar Film Festival, and many others.

MOTHERLESS is the first of Attie and Goldwater’s four films on abortion access, revealing the fatal complications resulting from unsafe abortions before the legalization of the procedure in Roe v. Wade. This thirty-minute short remains poignant and sobering almost thirty years after its initial release.

At the Philadelphia abortion helpline, counselors arrive each morning to the nonstop ring of calls from women and teens who are seeking to end a pregnancy but can’t afford to. In this short documentary we learn how economic stigma and cruel legislation determines who in America has access to abortion.

Maggie Growls is a whimsical portrait of activist Maggie Kuhn, who founded the Gray Panthers movement after being forced into retirement at sixty-five. Maggie Growls was the premiere program on PBS’ Independent Lens series in 2003.

This Emmy nominated film is a biography of the iconic African-American poet and activist. With appearances by Questlove, Talib Kweli, Ursula Rucker, Amiri Baraka, Haki Madhubuti, Jessica Care Moore, Ruby Dee, Yasiin Bey, Ayana Mathis, Imani Uzuri and Bryonn Bain, the documentary examines Sanchez's contribution to the world of poetry, her singular place in the Black Arts Movement and her leadership role in African American culture over the last half century.